From the history of the TESLA concern into the present. The 70-year brand history.

In Czechoslovakia, the nationalization of the industry in October 1945, six manufacturers of low-current technology merged into the national company TESLA, headquartered in Prague, current Czech Republic. The company TESLA was founded on August 10, 1946, at the Mikrofon factory in Prague-Strašnice with the participation of Yugoslav Minister Zlatarič Branko, Macedonian Minister of Industry Vasiljev Georgij, Minister of Industry Bohumil Laušman, representatives of the government, institutions, and universities.

The name TESLA was originally (and officially) inspired by the name of the famous electrical engineer Nikola Tesla. The establishment of the company was officially reported by the magazine Radioamatér in October 1946. After the ideological split of the countries of the socialist camp occurred in the 1950s and Yugoslavia at that time became unpopular, it was inappropriate to use the Yugoslav name, and thus the original idea of the birth of the name TESLA was changed to TEchnika SLAboprúdová (low-current technology).

TESLA Liptovský Hrádok
Due to the industrial backwardness of Slovakia at that time, especially in low-current technology (until the liberation there was one radio-technical manufacturer in Slovakia, TUNGSRAM light bulb factory in Bratislava) – it was recommended to build new production capacities in Slovakia.

In 1946 was held survey to find out where the best conditions for building TESLA in Slovakia (Pohronie, Gemer, Liptov). In the end, Liptovský Hrádok was chosen and in 1947 the construction of the company began. The new factory officially opened for production on Sunday, May 7, 1950, with a modest ceremony. Since then, it has gradually undergone tremendous development, characterized by employment, production, and export growth.

The company’s development history can be divided into several stages that have been decisive for its evolution. The first is to master the production of small components in the field of telecommunications, and signaling equipment and later, with the growing experience and professional maturity of the staff, to create the conditions for ensuring the production of sophisticated technology, especially in the range of small branch exchanges (or small PBXs).

At the next stage, in-house development construction was started, initially providing minor reconstructions, but later on some products, mainly in the field of telephone terminal equipment, which later formed the mainstay of the company’s production programme, began to be dealt with more and more frequently.

The product range was labelled as small and medium-capacity PBXs, line concentrators and small-capacity public automatic telephone exchanges for the automation of local telephone circuits – a decisive milestone in the development of the company.

Connecting with the school

The construction of the company is also connected with the construction of the Secondary Vocational School of Electrical Engineering. The rapid development of electrical engineering after the war required new qualified specialists, which was the impetus for the establishment of the TESLA plant in Liptovský Hrádok in its own educational facility TESLA Karlín. On October 1, 1951, the first school year began at the Centre for Working Adolescents with the attached Elementary Vocational School in Liptovský Mikuláš, with teaching in Liptovský Hrádok.

Historical passage to be continued

In the following period, we will look at our company’s history. You will learn everything from the beginning of building the company to the current operation of TESLA. So keep an eye on our website and LinkedIn to make sure you don’t miss anything. 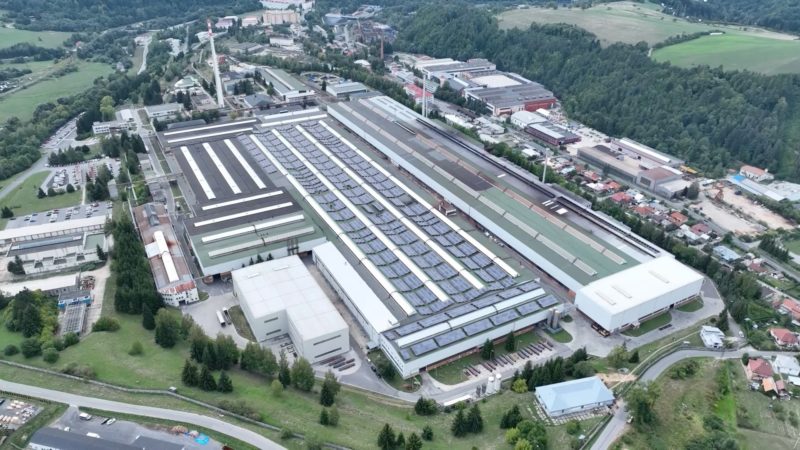 Zeleziarne Podbrezova modernizes and will use energy from the largest industrial photovoltaic power plant in Slovakia.
Read more

The first expo-conference in the field of solar energy in Romania. Salar Energy Summit brings together the world's largest manufacturers and distributors of solar panels with the main investors with local and international capital in solar energy.
Read more